The lead screw kit I recently acquired for the traverser included an 8mmx6mm flexible coupler for joining 8mm lead screw to a stepper motor. I had hoped that the specs meant 6.35″ aka 1/4″ but no such luck. My choices where either to go and buy an 8×6.35 coupler from my local robotics store (yeah, being able to say that is kind of cheating) or drill out the 6mm hole to take a 1/4″ shaft. The couplers are less than $10CDN so it isn’t that big a deal but I decided that drilling with my lathe was a capability I needed to exercise.

Of course, I didn’t have an appropriate set of drill bits so out I went to the local big box store. $50 later, I was ready to save $10. Payback on the lathe is going to take a long time at this rate. 🙂 Seriously, though, I think a boring capability (for bigger holes) is the only thing I still need to acquire. From hereon in, it should be all down hill.

The actual setup and operation was refreshingly simple, I just removed the set screws from the coupler, chucked it in the self-centering three jaw chuck, chucked the bit in the Jacobs chuck in the tail stock, adjusted for distance and drilled away. It took no more than five minutes.

If this was all I ever needed to do, the lathe would obviously be overkill. On the other hand, having one available makes this sort of thing dead easy and it gives me satisfaction to get useful things done with it.

Here is the setup with the work just done:

And here is the coupler installed on the stepper shaft. 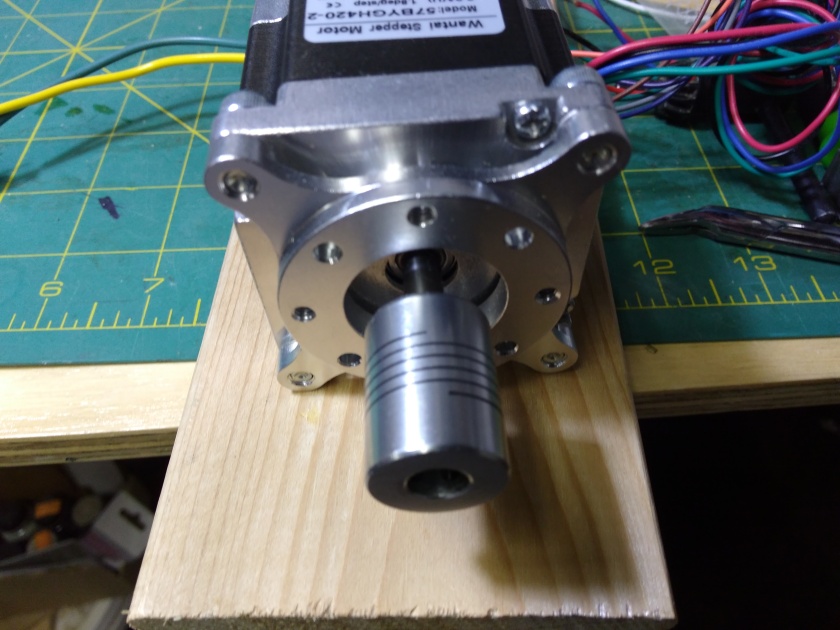